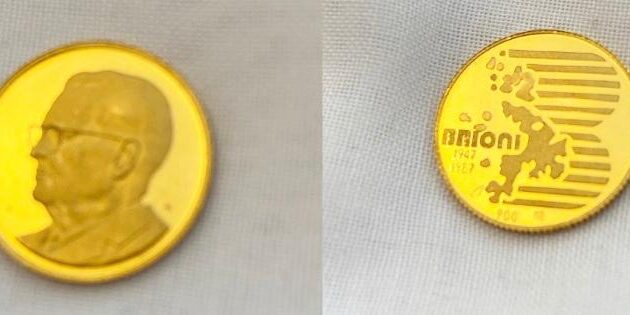 One of the very important days of my life, was the day when I become a “Tito’s pioneer”.

In former Yugoslavia, many of us were looking forward to this day as we became members of the pioneering community, sharing all the same values and culture,  at the age of 7.

Some might say otherwise today, but back then we all looked forward to be honoured with red scarves and navy blue hats, called “Titovka”, while proudly receipting our pledges.

I looked forward to this day as I knew there would be a special gift from my family.

And there it was, a Tito’s “medaljon” (little golden coin) received by my late and beloved mother. “Medaljon” once stood for unity, solidarity marking milestone of my early maturity, acceptance and sense of belonging. This “medaljon” has been with me from Nov 1983. Even though it is not that old, it is something that connects me to a happy, humble, peaceful time full of joy and laughter. A time when I was surrounded by my loved ones.

Little did I know that 9 years later, tens of thousands of Bosnians would be killed. Others were tortured both physically and mentally, starved and humiliated in concentration camps, while others managed to flee the world’s worst atrocities since WWII, being left scarred for life.
These atrocities were committed by the very same Yugoslavian and Serbian Army, that was once built by Marshal Tito.

A decade after Tito’s death everyone forgot about our honourable pledges.

“Today, when I become a pioneer,

I give an honorable pioneer’s word

that I will diligently learn to work,

respect parents and the elderly,

I will be a faithful and honest friend,

holding a given word,

that I will love our homeland,

that I will develop brotherhood and unity

and the ideas that the Marshal Tito fought for,

that I will appreciate all the people of the world who iron freedom and peace!”