Support documentary “BETWEEN MOUNTAINS AND WARS” 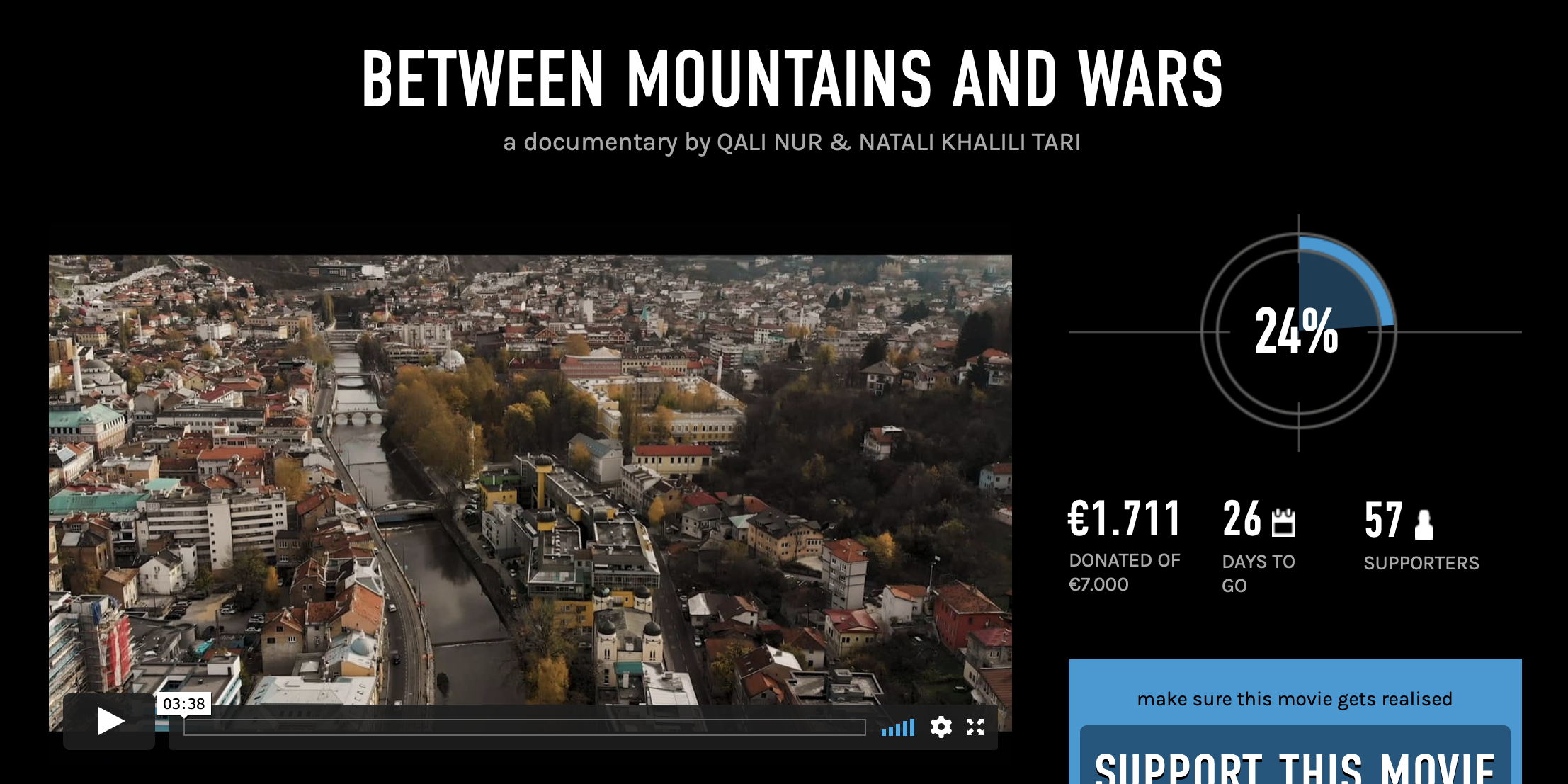 Last year my friend and I spent three months in Sarajevo for our documentary ‘Between Mountains and Wars’. The documentary is about three Sephardic-Bosnian women, who have survived both the Holocaust and the 90’s war in Bosnia and Herzegovina. Between Mountains and Wars both serves as a hopeful tale of a community which refuses to be divided as well as a cautionary account of a history not to be forgotten nor repeated.

We’ve done the research, conducted the interviews and filmed most of the documentary. This was all self funded, but for the final stretch we’ve started this crowdfunding to raise the remaining amount. We need to get at least 80% of our aim, otherwise all money donated will be returned to the donors.

We have until the end of this month (Dec 2020) to do so! If possible would you be able to help us spread the word?

We want this important and solemnly known part of history to be permanently documented and accessible to people both in and outside of the Balkans.

When people think of Bosnia, to most, the 90’s war and ethnic divisions immediately come to mind, but in Sarajevo, a city where Sephardic Jews sought refuge over 400 years ago, the Jewish community lives in coexistence alongside their Muslim, Catholic and Orthodox Christian neighbours. Ester Kaveson Debevec, Rifka Albahari Raus & Laura Papo Ostojić, three Sephardic women between the ages of 79- 87 not only lived through the 90’s war but have also survived the Second World War. At the heart of the documentary is the women’s focal point of congregation; the Jewish community centre. It is situated in the only active synagogue in Bosnia & Herzegovina. Once making up 1/5th of the population in Sarajevo, the community now survives only in its hundreds.  Ester, Rifka and Laura’s stories each present hope in a backdrop of a horrific history. Non Jewish neighbours and friends helped them survive the second world war as children. Almost half a century later, the three women did their utmost to help their fellow Sarajevans survive the siege regardless of ethnicity or religion.

Between Mountains and Wars both serves as a hopeful tale of a community which refuses to be divided as well as a cautionary account of how quickly hateful rhetoric can turn into persecution and war. A necessary warning in a European atmosphere which grows more and more islamophobic and antisemitic each day. We want this important and solemnly known part of history to be permanently documented and accessible to both people in and outside of the Balkans. Being amongst the few people left of this generation to tell their stories, the women hope that never again this time truly means never again.

In late 2019 we travelled to Sarajevo to conduct the research and preliminary  interviews and film the majority of the documentary. These three months were fully self-funded. Now we have an ample amount of footage to make the documentary,  however we need funds to cover crucial elements such as music and archive materials. These are needed to illustrate key places and events, enhancing the historical trajectory of the film. Furthermore, we would love to have a professional sound mixer help us with our documentary. However, we would want to pay this person fairly for his or her work. Especially in these corona times where creatives and musicians are very vulnerable. Thus, the majority of the donations would be used to cover post production fees. In addition, if possible we would like to return to Sarajevo to capture additional footage that would make our documentary shine even brighter. Finally, if there are any funds left we will use them to pay the festival fees so that our documentary can be screened at international festivals making it widely available to diverse audiences.

If you decide to support this project by donating or even sharing please feel free to visit the following link: